(although we ARE interacting with it. We can only experience parts of it, but we’re still making contact)

( This seems so skin deep, there must be more to it. The fact that we can’t know anything about a thing may make it indistinguishable from not-existing, but not ontologically. It just means we can’t tell. And what is his definition of knowing. Must be 100% certainty. Which is unreasonable. It seems fallacious to argue that because we cannot know X, then X does not exist. Now, we may say if we can’t know anything about X then we can act as if X does not exist but then the question is can we actually know things, or at least imperfectly know things to a high confidence level)

(but the invisible can still kill us!)

(Ok: yes the pattern of things is what makes the thing “real” because it gives it it’s functional structure. It may be a construct to think of it as a thing, but that’s just our mental grouping. It’s not the thing itself. What is a pattern? A pattern of what?)

( yes, I agree. The issue here is our understanding though, not ontology)

( Is this because we build on past thoughts. We don’t start from scratch, and we don’t stop looking for patterns)

( I’ve had that thought several times throughout this lecture series) 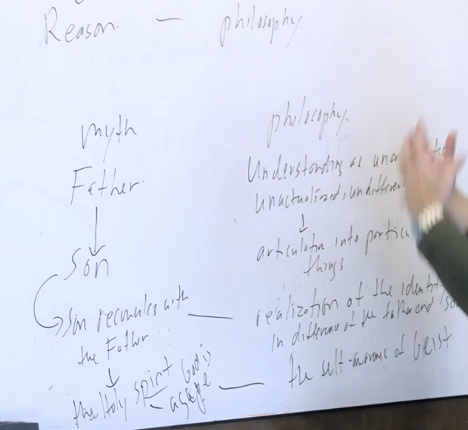