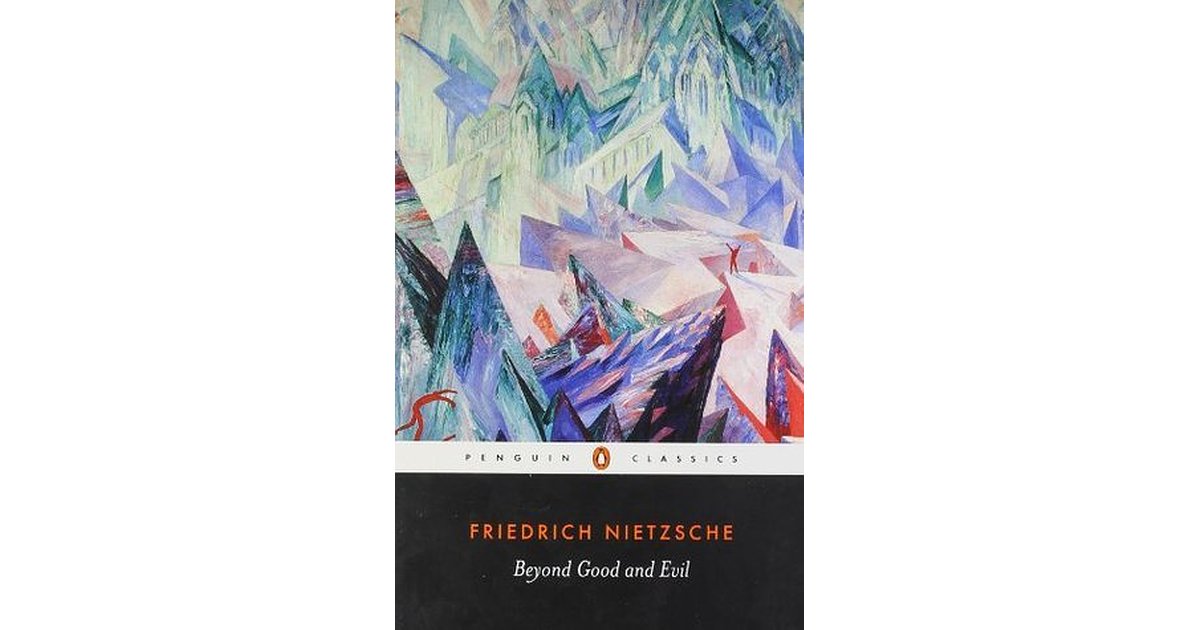 Friedrich Nietzsche - Beyond Good and Evil my notes first meeting Will to Power vs Ego Acronym from Shashank on how to disassociate from you ego and be objective High-G H - Get out of the head. I - Improve Immune response Importance of having open and honest discussion about difficult...

my notes second meeting Discussed christianity, old testament vs new, and Nietzsche’s thoughts on them. Sam Harris seems to want Brave New World. Brave new world optimises for wellbeing above all else. Nietzsche’s uberman. Was Raskolnikov an...

Discussed christianity, old testament vs new, and Nietzsche’s thoughts on them.

Nietzsche’s uberman. Was Raskolnikov an uberman? No, he was disintegrated. Ubermen are integrated. Such as your grandma, or elon musk.

The faith demanded and often achieved by early Christianity in the midst of the southern world of sceptical free spirits, where philosophical schools had not only battled for centuries but where the Roman empire had also educated men to be tolerant, is not the same as that naive and quarrelsome underlings’ faith with which Luther, for example, or Cromwell, or any other northern barbarian of the spirit clung to their God and their Christianity. Rather, that early faith is more like Pascal’s, one that has the horrible aspect of an ongoing suicide of reason— a tough, long-lived, wormlike reason that cannot be killed off all at once with one blow. From the beginning, Christian faith has meant a sacrifice: the sacrifice of freedom, pride, spiritual self-confidence; it has meant subjugation and self-derision, self-mutilation. There is cruelty and religious Phoenicianism* in this faith, which is demanded of a soft, differentiated, and often pampered conscience. This kind of faith assumes that the submission of the spirit is indescribably painful, that the past history and habits of this kind of spirit are resistant to the absurdissimum,* in which form ‘faith’ confronts it. Modern people, deadened to all the terms of Christian language, no longer have a feeling for the terrifying superlative, which for the ancient sensibility lay in the paradox of the formula ‘God on the cross’. At no time or place has there ever been such a daring reversal, a formula so frightful, questioning, and questionable as this one: it ushered in a re-evaluation of all ancient values. Thus did the Orient, the profound Orient, the Oriental slave take vengeance on Rome, with its noble and frivolous tolerance, vengeance on the Roman ‘Catholicism’ of faith— and it was never faith, but rather the freedom from faith, that half-stoic, smiling lack of concern for the seriousness of faith, which enraged the slaves about their masters, set them against their masters. ‘Enlightenment’ enrages the slave, for he wants what is unconditional; he understands only what is tyrannical, even in morality; he loves as he hates, without nuance, into the very depths, of pain, of disease— his manifold hidden suffering rages against that noble sensibility which seems to deny suffering. Indeed, scepticism about suffering, at bottom only an aristocratic moral pose, played no small role in the origins of the last great slave rebellion, which began with the French Revolution.

Discussed hypothesis with the bolded section is that it seems very similar to those who are ideologically or religiously possessed. Such a mormon who loses the church, only to join third wave feminism or marxism or nazism or antifa.

Cognitive dissonance? Who do you sacrifice? Your ideal self, actual self, or should self. Forgiveness sacrifices the actual self. Donya and Raskolnikov.

Ties in to previous weeks discussions of detriot become human - those who earned their freedom, versus those who had it handed to them - the former without the connections yet to realise their freedom (to make it, as no will to existence was achieved)

Noted the positive correlation between hardship in childhood and entrepreneurship.

The more stable the situation, the more nuanced factors played a role. An unstable household, has a stronger impact than amount of siblings.

Discussion of what is sexism and racism in east verse west.

Discussion on masculine pronouns being a gender neutral term and paradaigm for english native speakers, and many others. It is inherited from biology, women can act as men, but men cannot act as women (birth). Therefore, male pronound encompasses women, whereas female pronoun doesn’t. Offensive to English sensibilities when female pronoun is used as a gender neutral term, in the same way it would be offensive to some other mother languages sensibilities for the opposite to be the case. Should be accepted. From the Oxford Dictionary of English:

he | hiː |
• any person (in modern use, now chiefly replaced by ‘anyone’ or ‘the person’: see usage note below): he who is silent consents.

An earlier blog post of mine on the matter:

Stop using “She” to refer to all genders, it is gender-specific by definition

Why is the gender specific “She” being used throughout this? “She” is by definition specific to female gender identification only, excluding all non-female genders, such as males, hermaphrodites…

Talked for a bit on things that my memory fails me on.

Discussion on libertarianism, does it stand up to critique?

Will to Power vs Ego

Acronym from Shashank on how to disassociate from you ego and be objective
High-G
H - Get out of the head.
I - Improve Immune response

Importance of having open and honest discussion about difficult issues

Suffering
The redemptive power of suffering
How do you prevent suffering from turning you into hateful person?

JBP or any other lectures

John’s trick to increase your reading speed - Play the audiobook at 2x speed and read at the same time. In my experiment on this I have observed that this increases concentration as well.
See Ben’s notes for discussion on Free market and role of govt. regulation.

Master vs Slave Morality
In which instance it is a good idea to escape slave morality?
Knowing vs Doing (Being aware you have slave morality is not enough to escape it or develop master morality)

And we’re live for the Podcast session: